The people of Baliem Valley, the Dani were discovered accidentally by American zoologist and philanthropist Richard Archbold, while on a zoological expedition to New Guinea in 1938. In the Dani tribe, the men wear distinctive tribal attire, including face paint, feathers, animal bones and intricate penis sheaths named koteka. The women wear skirts made from woven orchid fibres decorated with straw and woven bags, worn from the head, named noken.

Monk in the dark 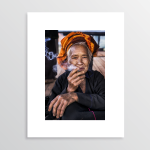 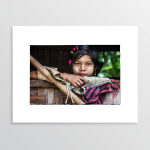